Where the Garbage meets the Sea 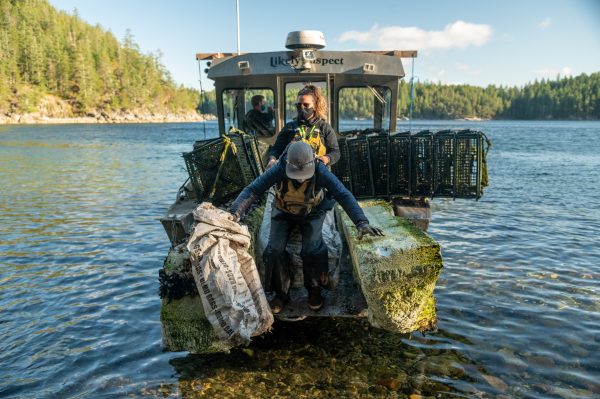 I slide my body over the bow of the boat, careful not to catch my coat tails on any hooks or cleats. With my feet dangling, I lower myself onto the slippery shoreline below, trying to judge where the water is shallow enough not to flood my boots. Safely on dry land, I remove my mask and put on my safety goggles as I cast off the bowline and the boat chugs away from the shallows. Turning to my team mates, we determine our buddies and set off along the pebbles, peering around for any objects which do not belong here.

Something catches my eye, so I move to the fringe of where the beach meets the forest. In amongst the tree roots and salal bushes and undergrowth, is a huge piece of dirty Styrofoam: clearly carried far above the high tide line during a previous storm. After extracting the torso-sized chunk, my teammate calls to me from a few steps further down the beach. I only just hear it, over the sound of the wind whistling around my ears and raindrops falling heavily from the sky. 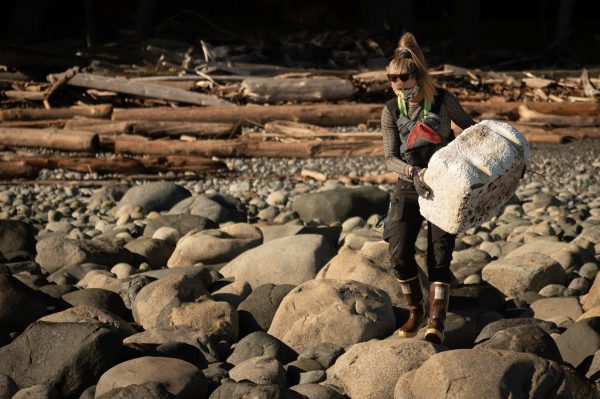 Gingerly, I make my way towards her across the wet log booms, feeling nothing like the nimble mountain goat that I try to embody. When I arrive, I understand why she motioned me over. Beneath her feet and extending many metres in all directions, are masses of plastic oyster cages, wrapped up in a huge black fishing net. As we begin tugging at the lost fishing gear, we realize that much of it is beneath the surface: wet sand has set like cement, claiming the plastic forever. Despite clearly wishing to become part of the environment, it’s not meant to be – plastic netting, rope and fishing gear will not degrade and merge with nature, but will gradually break down into millions of pieces of microplastics.

“Microplastics have been detected in marine organisms from plankton to whales, in commercial seafood, and even in drinking water. Alarmingly, standard water treatment facilities cannot remove all traces of microplastics. To further complicate matters, microplastics in the ocean can bind with other harmful chemicals before being ingested by marine organisms.” – National Geographic Forty minutes later, by heaving, cutting, digging and hacking, we’ve managed to free the majority of the mess. Nets, rope, baskets and pots are all tangled together, but it’s no longer embedded in the sand. We haul our catch down to the high tide line and rejoin the rest of our team mates.

Collectively, in less than an hour, five of us have scoured a 50m stretch of beach and gathered enough garbage to half-fill a 20ft boat. In addition to the discarded fishing gear and styrofoam, we found a big blue barrel, several rubber tires, multiple yards of rope, some broken buckets, 1 full can of lager, a mouldy seat cushion, a bottle of mysterious liquid and several lonely shoes. 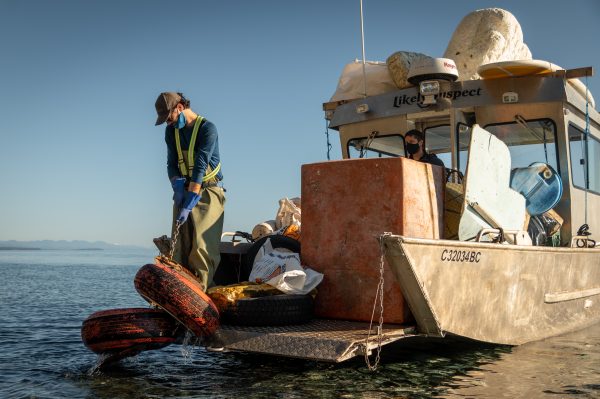 This was the first beach of the day: we still have several more stops to make. So back onto the boat we climb. I nestle myself in amongst the garbage to shelter from the worsening weather. We chug around the rocky headland to the next little pocket beach marked on the map. Our boat driver points towards the landing spot. And here we go again.

The South Discovery Islands Marine Debris Clean Up crew was made up of 24 people. Between October 2nd – December 3rd we covered 267km of coastline and collected over 40 metric tonnes of garbage – more than 50% of which has been diverted from landfill: either to be reused or recycled. The BC coastline covers nearly 26,000km, so there’s still plenty more to do.

We gratefully acknowledge the financial support of the Province of British Columbia through the Ministry of Environment and Climate Change Strategy.