Learn About the Pacific Harbour Seal

On many of our sea kayaking tours around Vancouver Island, we have the opportunity to view Habour seals in their natural environment. Our guests often ask about these amazing creatures, so we thought we would pass along some facts about seals for anyone who might be interested!

Seals belong to a group of mammals called Pinnipeds, meaning ‘feather foot’, which includes seals and sea lions. The Pacific harbour seal can be found along the east coast of the Pacific, from Alaska to California. An adult may reach a length of 1.6 – 1.9 m and weigh 60 – 120 kg, females being slightly smaller than males. The colour of their fur can be black, brown, tan or grey, with light or dark spots. Like other marine mammals, they have a thick layer of fat or ‘blubber’, which keeps them insulated from the cold water. They can often be seen ‘hauled out’ at familiar resting spots on rocky reefs, sandbars or boulders and are a common attraction for wildlife or nature enthusiasts visiting the B.C. coast.

Often confused for their much larger relative, the sea lion, Harbour seals differ in a few distinct ways. One giveaway is that sea lions have visible external earflaps, whereas Harbour seals are considered ‘earless’ seals (in fact they simply have an internal ear canal with minimal external flesh). In addition to their larger stature, sea lions also have longer flippers allowing them to support themselves and walk on land. Harbour seals, by contrast, are unable to rotate their rear flippers forward making walking on land a fair bit more difficult for them. 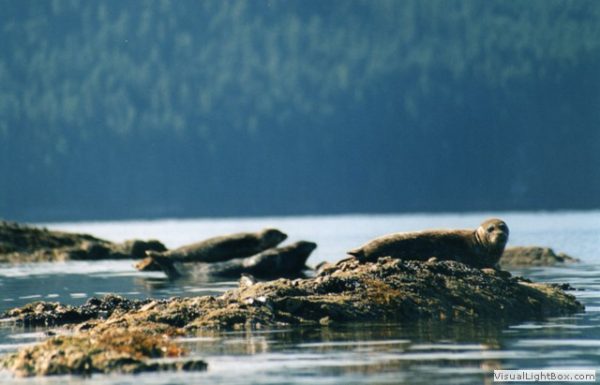 Harbour seals are excellent swimmers though! They use their rear flippers for propulsion and their front flippers for steering. Adult seals may eat 3-5 kg of food per day, including fish, crustaceans, and molluscs. When foraging, harbour seals usually make short dives of 3-7 minutes to less than 100m; however, they can dive to over 300 m and hold their breath for up to 25 minutes! When a seal’s face is submerged, it automatically holds its breath, its heartbeat slows, and blood circulation to non-essential organs is reduced – all adaptations that allow them to stay underwater for long periods of time. Hearing and sight are very well developed. Large eyes, protected by oily ‘tears,’ help the seal see in deep, dark waters, while their hearing is 14 times better underwater (160 kHz) than on land (12 kHz). This incredible sense of hearing has led many scientists to believe that Harbour Seals have the ability to echolocate, but, in fact, the seals’ whiskers are highly sensitive, allowing them to detect the movement of prey in a way that is comparable to the echolocation of whales and dolphins. This ability comes in handy often while locating prey such as rockfishes, greenlings, smelt, perch, herring and flatfishes. Blind Harbour Seals have been known to not only survive but actually thrive in the wild using these other sensory advantages. 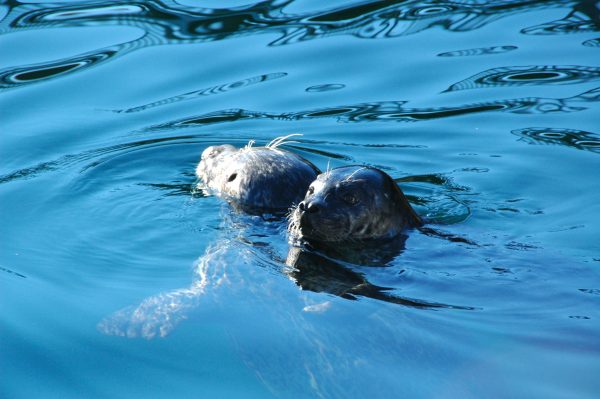 In B.C., seal pups are born on tidal reefs or beaches between late June and September and are weaned after four to six weeks. A harbour seal pup can swim and dive shortly after birth but requires practice to increase its skill and endurance for hunting independently. Males may live for 20-25 years, and females for 30-35 years.

Historically harbour seals in B.C. were commercially harvested for pelts, however, the species was protected in 1970 and populations now appear to have stabilized at historical levels, with more than 105,000 individuals counted during a 2008 aerial survey.

The harbour seal’s main predator is the killer whale. They are protected against commercial exploitation but are still hunted for subsistence by some communities, and may be shot by fishermen due to perceived competition with fisheries. Additional threats to harbour seal populations are pollution and the reduction of their food stocks, as well as disease. As a higher predator, the harbour seal is an important part of coastal ecosystems; the health of seal populations can tell us a lot about the health of our oceans.