A guide's view of the Great Bear Rainforest.

Nothing makes a Spirit of the West kayak guide get all mystical like the Great Bear Rainforest. Ask any of our guides about the Great Bear Rainforest Expedition and they’ll get a far-off look in their eyes, breathe deeply, and say something akin to “ah, yes, the Great Bear.” To a kayak guide, our most northerly expedition (in the Central Coast territories of the Heiltsuk Nation) represents the epitome of why we do the job we do. Words fail to describe the place, it’s remoteness, it’s beauty, the staggering sense of being a small creature in a vast world that comes with traversing its waters.

One of the main drivers of these feelings is the challenge and joy of leading groups in open-ocean environments. While the Great Bear has more than its share of quiet, protected waters hidden behind islands and reefs, it is the exposed coast—that is to say, the coast-line and waters subject to ocean swell— that offers the most rewarding paddling. 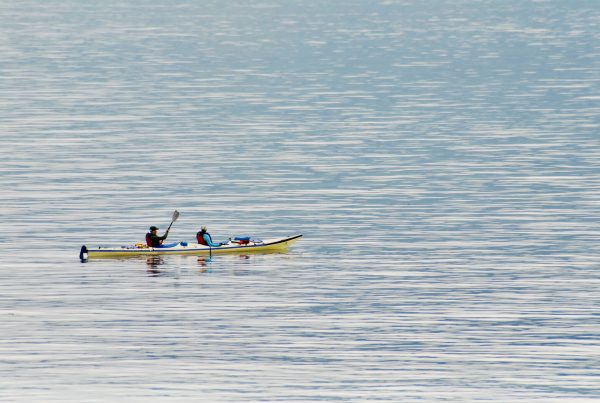 The words “ocean swell” can be somewhat daunting to novice and intermediate paddlers, evoking thunderous breaking surf, or maybe the scene from the movie “A Perfect Storm” where a fishing boat climbs a mountainous wave only to flip end over end.  True, the sea is immensely powerful and should be given the utmost respect, but a bit of understanding about the forces that create and drive waves can go a long way towards dispelling any unrealistic fears.

As kayakers, we are affected by two primary types of waves: wind-waves and swell. Both are formed by wind blowing across the water, and both are affected by a variety of factors; wind speed, water depth and fetch (the distance of open water that wind blows across) to name a few.

Wind-waves are caused by localized weather and can cause a body of water to go from glassy calm to choppy and chaotic in a very short period of time. Think of a lake on a windy day and the small whitecaps that break on it. Those are wind waves.

Swell, on the other hand, is formed by distant weather far out to sea (sometimes thousands of miles!). Because of the vast distances swell travels, the waves tend to become more uniform and rhythmic, with long wavelengths (the distance between crests). The surf we experience while at the beach is swelling that reaches shallow water “feels” the bottom, steepens, and eventually breaks under its own weight. Luckily, most of the landings in the part of the Great Bear are protected from swell, and we tend to land on beaches with lapping — rather than crashing — waves.

Kayak guides are trained to recognize what makes waves dangerous or not. The factor that they are most concerned about is steepness. A general rule of thumb is “white water=bad water”, in other words, if waves are so steep that they are breaking and creating white-caps, it might be a good day to explore the shore, have a beach fire and enjoy some camp food.

Luckily, though, our paddling season in the Great Bear aligns nicely with the calmest weather of the year, and crossings of open water are timed to coincide with favourable conditions, so more often or not the swell we experience there is what we fondly call “rollers”; gently sloped swell with long wavelengths.

There are few experiences as exhilarating and humbling as setting off in a kayak early in the morning when the winds are dead and the sea is mirror smooth, and then paddling out of the protection of the islands into the swell, rising and falling with the rhythm of the sea. 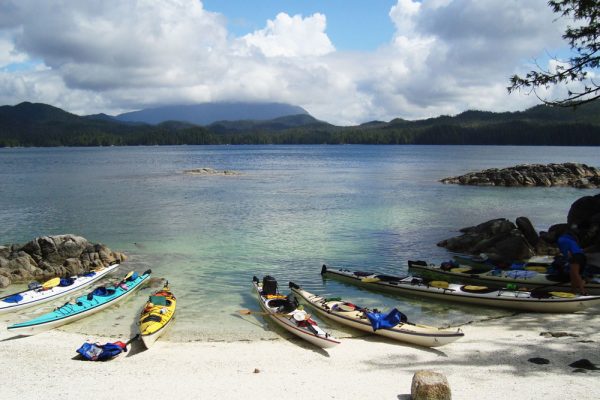