Moon Jellyfish in BC

The Most Abundant Species of Jellyfish in Coastal BC

Imagine — more than 500 million years ago, before dinosaurs roamed the land, earth’s oceans were already abundant with peacefully pulsating jellyfish.

In coastal British Columbia, one of the most common types of jellies are moon jellyfish, scientifically known as Aurelia aurita. We often see them swimming just beneath the surface of the sea while kayaking in shallow waters like bays and harbours.

While sightings may be common here on the coast, it’s endlessly soothing to watch this alluring species move through the water with ease. Moon jellies are invertebrates, meaning they don’t have a backbone — or any bones for that matter. You also won’t find a heart or a brain in these squishy little creatures, thus their actions and movements are automated responses to sensory stimuli. When you break it down, moon jellies are 96% water, 3% protein and 1% minerals.

ARE MOON JELLIES DIFFERENT FROM OTHER JELLYFISH?

Moon jellies differ from other west coast species in that they lack long, potent stinging tentacles. Instead, the edges of their bell are divided into scalloped lobes, which are fringed with short tentacles. Moon jellies technically still sting, although it feels much milder and can often go unnoticed due to the thickness of our skin.

The easiest way to distinguish a moon jelly is to look for its 4 horseshoe or crescent-shaped gonads, which are easily visible through their translucent bells. Moon jellies differ slightly in colour depending on their diet; pink or lavender indicates a largely crustacean menu, while orange suggests brine shrimp are the food of choice.  You really are what you eat. Dietary preference aside, all moon jellies use their tentacles to sting their prey, then bump it up to the surface of their bell to capture it in an entanglement of mucus.

HOW DO MOON JELLIES REPRODUCE?

Interestingly, moon jellies reproduce sexually and asexually through different stages of life. For mature jellyfish, males release sperm into the water and females ingest the floating strands. Females then release fertilized eggs back into the water, where the small larval forms settle on rocks or structures near the seafloor and develop into polyps. It’s during this stage of life, which can last for several months or years, that asexual reproduction occurs. The polyps create clones of themselves and launch mini buds, also known as ephyrae, into the surrounding water. These cloned forms then grow into the adult medusa form that we all recognize as the jellyfish. While the life cycle lasts multiple years, adult jellyfish generally only live for several months before the process begins again. 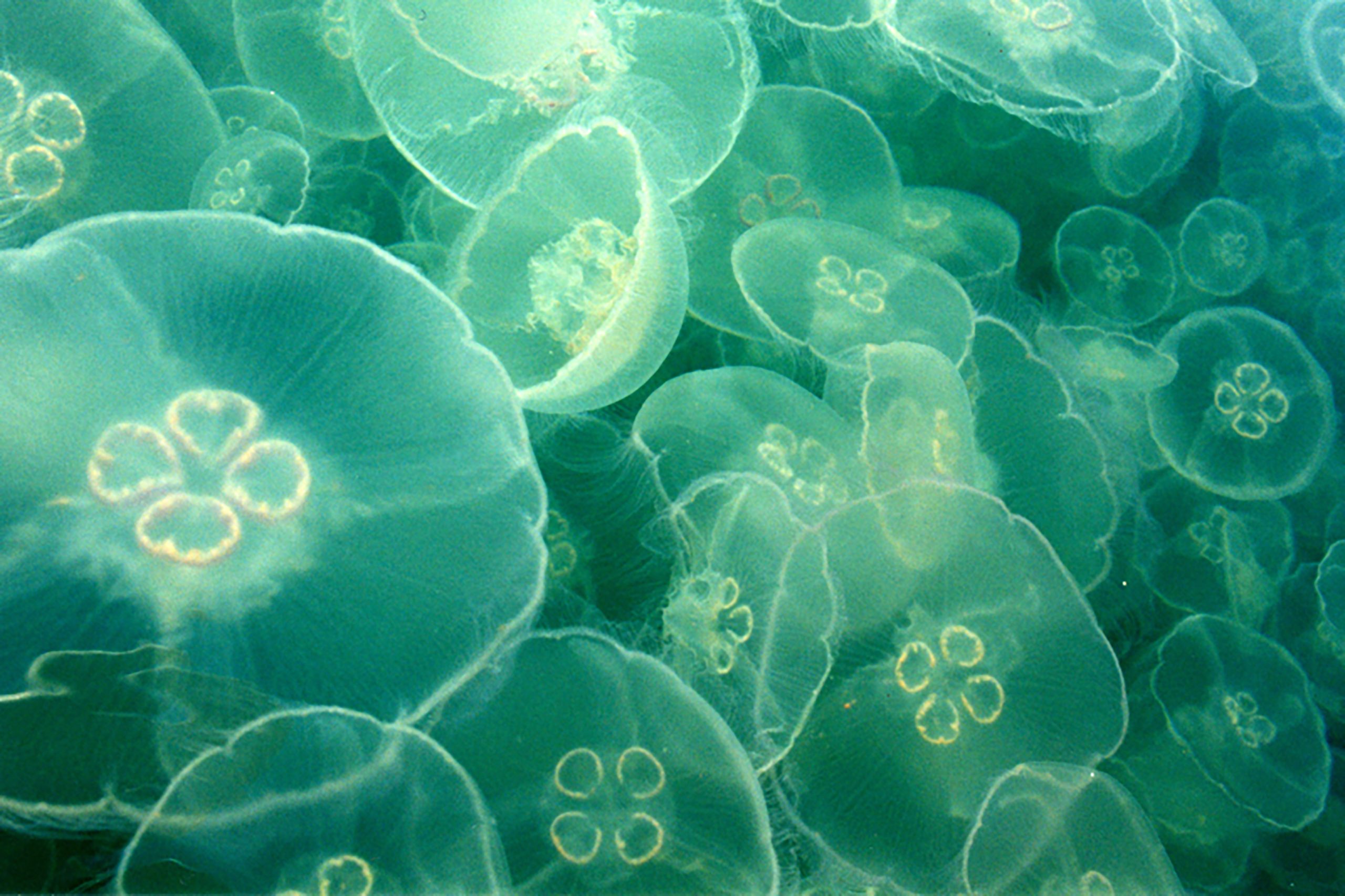 A smack of moon jellies, spotted in Roscoe Bay during our Desolation Sound tour. Moon jellies commonly congregate in this warm water region during the spring and summer for breeding season.

WHERE TO FIND MOON JELLYFISH IN BC

Moon jellies are thriving across the coast of British Columbia, and can be found all the way from Alaska down to California. While they can be found 1000m below sea level, they often float near the surface in shallow coastal areas. We explore countless remote bays and harbours during our kayaking tours, so it’s very likely you’ll see them gliding around. If you’re lucky, you might spot a large grouping, also known as a smack of jellies. And if you’re really lucky, when one smack merges with another, you get a bloom of jellies!

Hakai Wild: Moon Jellyfish. An ethereal spectacle off the coast of BC as thousands of moon jellyfish pulsate in the current.

National Geographic: Jellyfish Life Cycle. Jellyfish progress through the various stages of life from polyp to ephyra to medusa.