Many guests join us from around the world to kayak B.C. in hopes of seeing all kinds of wildlife. One species that many of our groups are fortunate to see is the Black Bear, which can often be found scavenging for food on the beaches we paddle by (and occasionally down the beach from our Johnstone Strait Ultimate camp!). Black Bears tend not to be as interested in us as we are in them, keeping their distance from our groups for the most part. But they are an amazing species that we feel fortunate to have here on the B.C. coast. We wanted to pass along some facts so that you can get excited about them too! 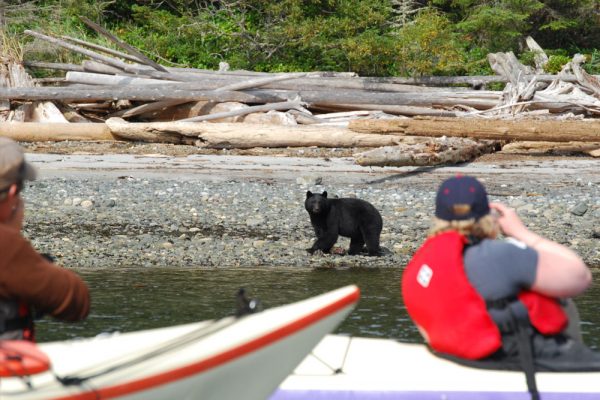 How long have black bears been in Canada?

The black bear is the smallest and most widely distributed member of the bear family found in North America. In British Columbia, black bears are numerous, tolerant of human activities and live in all areas of the province except most urban centres. During the last ice age, black bears were isolated to the United States and Haida Gwaii (former the Queen Charlotte Islands), but once glaciers melted, they re-colonized coastal BC. On Vancouver Island, ten-thousand-year-old skeletons have been found in caves indicating that black bears arrived soon after the glaciers of the last ice age receded, and were larger than modern-day black bears. The bears on Vancouver Island are a unique race and are thought to have retained more ice-age characteristics than mainland bears because of their isolation.

Black bears have a chunky body, small black eyes, a broad head, rounded ears, a short tail, and coat of thick, long, dark hair. Adult size and weight varies according to sex, season, food supply, and geographic area. Males can be 60 to 90 cm at the shoulder and weigh 80 to 300 kg. Females are smaller, weighing 40 to 140 kg. Grizzly (brown) bears are larger and have a prominent shoulder hump, a dish-shaped face and much longer claws adapted for digging. 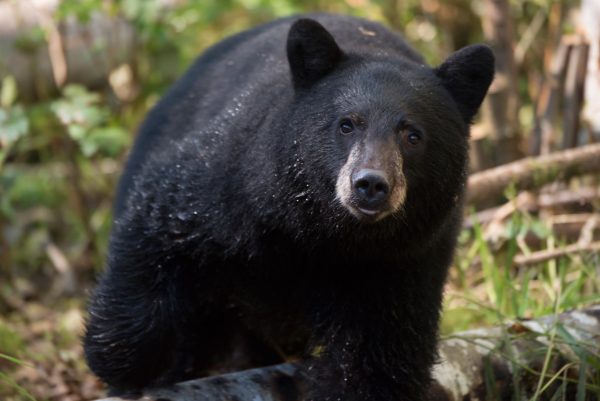 What are bear babies called & who raises them?

In BC, black bears mate in June and July but due to a phenomenon called ‘delayed implantation’, the baby cub does not begin developing until October or November. Cubs are born in January or February; they are hairless, blind, and weigh about 400 g. They’re usually born in pairs but litter size can vary from one to five. They nurse while the mother hibernates until they leave the den in spring. Cubs stay with their mother for their first year and she protects them and teaches them how to survive. They are weaned between July and September and hibernate with their mother their first winter. The mother will drive the cubs away when she is ready to mate again, so by the middle or end of their second spring, they are on their own. Black bears can live for 25 to 30 years in captivity, but usually much less in the wild. 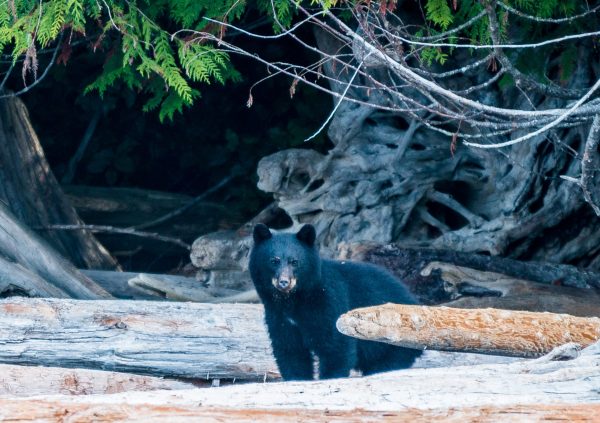 What do black bears do?

The area that a bear uses throughout the year for food, water, breeding, and shelter is called its ‘home range’. Home ranges of adult males are typically 25 to 150 km square and for females 5 to 25 km square. Black bears are mostly solitary. Hibernation is an important survival strategy for bears in BC when their main foods – green vegetation, berries, salmon, and insects – are not available in winter. Black bears typically hibernate for 3-5 months on the south coast, during which time their heart rate, oxygen intake and body temperature drops. Hibernating black bears do not eat, drink, urinate, or defecate and may lose up to a quarter of their body weight during hibernation!

How is the black bear population in BC doing?

Current estimates of the black bear population in BC range from 120,000–160,000. Numbers vary from year to year and although they are affected by illegal poaching, traffic kills, human conflict, habitat loss and the collapse of some salmon stocks, the species is not currently rare, threatened, or endangered. 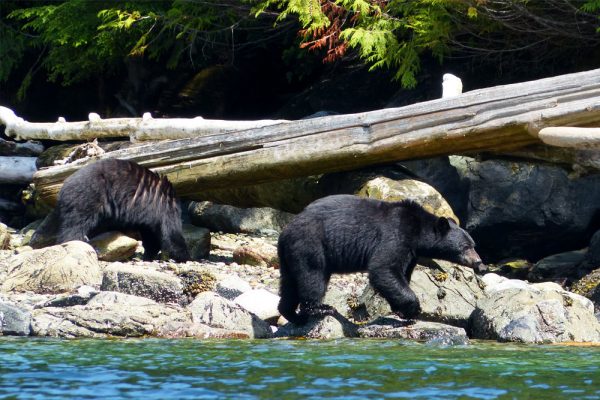